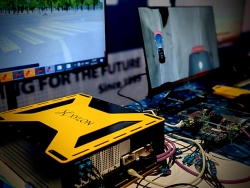 Electronics specialist Xylon is demonstrating live its complete demo HIL system that converts sensory data generated by a software simulator into real automotive stimuli for the attached parking assistance ADAS ECU. To develop the demo and explore different methods of connecting hardware ECUs to simulation software, Xylon has teamed up with rFpro, an expert in driving simulation software and an exhibitor at the expo.

“rFpro simulates the car model, its surroundings and four 1920x1080 pixels at 30fps video cameras,” explained Galic. “Camera image generators convert native RGB888 pixels into common sensors’ YUV420 pixels and add a fish-eye lens distortion typical for optics in this ADAS application. Xylon’s data transfer plug-in connects to rFpro’s interface for externals, originally developed as an interface for soft ECU models, and hands the simulated camera videos over to the streaming application. Video data is formatted into standard MIPI packets typically generated by real-world sensors and is timestamped before being transmitted to the logiRECORDER via a 10 GigE Ethernet link.”

“The ECU displays complete 360° surroundings of the car by stitching together video inputs from the simulated cameras placed on the car model’s front grid, the rear and within the side-view mirrors. The car model and its surroundings can be seen from different perspectives set up by a mouse-controlled virtual flying camera.”

The demo also integrates the loop-back feature. The ECU's responses connect back to the logiRECORDER through the automotive CAN interface, and it sends them via Ethernet to the simulator. It turns the complete demo setup into a fully featured virtual test drive simulator, seeing that the simulator can adapt simulation scenarios based on the received ECU's responses.
Instead of working in a special diagnostics mode, the ECU runs production firmware. Inputted raw data is generated to a level that enables full sensor fusion and perception testing, as well as full ECU controls. The Surround View ECU can be exchanged with other types of ECUs.

Gordan Galic is speaking on Day Two of the conference at 4:05pm alongside Matt Daley, operations director at rFpro, on ‘HIL simulations reach a higher dimension of realism.’