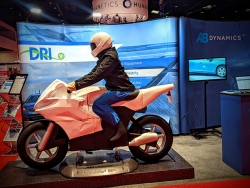 The first is the Soft Motorcycle 360 powered two-wheeler (PTW) target while the second is the Soft Pedestrian 360. The targets will be used for developing and testing active safety systems by vehicle manufacturers, test houses and regulatory bodies.

The Soft Motorcycle 360 complies with Euro NCAP 2023 and ISO 19206-5 draft requirements. In conjunction with AB Dynamics’ LaunchPad 80 platform, the target is capable of an 80km/h top speed, which means it can be utilized for all upcoming 2023 Euro NCAP test scenarios involving motorcycles.

The Soft Pedestrian 360 is ISO 19206-2 compliant and brings a new level of realism to the vulnerable road user (VRU) testing market. It is achieved through sophisticated articulation of both the upper and lower limbs for more realistic motion, including the hip, knee, shoulder and neck.

Using the LaunchPad VRU platforms and path following software, the targets are precisely controlled and choreographed with a test vehicle to within an accuracy of 2cm. This enables pre-programmed test scenarios, such as prescriptive Euro NCAP tests, to be conducted quickly and repeatably.

The Soft Motorcycle 360 will be officially launched later this month on September 14, 2022.

The Soft Motorcycle 360 and Soft Pedestrian 360 have been designed and engineered by AB Dynamics Group company DRI in California. The company provides research and testing services for the world's leading OEMs, completing hundreds of tests per year, including FMVSS, NHTSA NCAP and Euro NCAP tests. DRI has leveraged its extensive hands-on experience with test targets and equipment to design, develop and produce a range of best-in-class surrogate targets, such as the Soft Car 360.