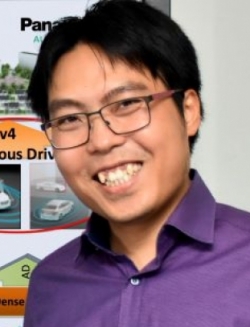 Dr. Duong-Van Nguyen is the Head of ADAS at Panasonic Automotive Systems Europe (PASEU) based in Germany, where he is also the representative of PASEU at EU commission. Before, he worked as R&D Manager at Hyundai Mobis (Germany) from June to August 2015, and as Research Engineer at Valeo (Ireland) from 2013 to 2015 after his Ph.D graduation in Robotics from University of Siegen (Germany, 2009-2013). Dr. Nguyen received three Research and Innovation Grants, including CARAMEL (2019), CPSoSAware (2020), and TRUSTEE(2022) by European Research Council. He has published 1 book, 2 book chapters, and a number of journals and conferences.

Automated Parking has been dominated by Ultrasonic-based systems for the last decade. Such systems have fundamental limitation in range and scene understanding, and thus can only cover simple use-cases with relative low success rate.This presentation will introduce a novel approach of fully-autonomous parking purely based on cameras system. The system can cope up with all scenarios including today-operational design domain and aditional challenging use-cases such as misalignment, narrow, small/thin obstacles (pole, baby, trolley, etc.), and cluttered environments (bushes, nets fence) with and without park marking. The success rate of the proposed system is much higher than the existing systems.