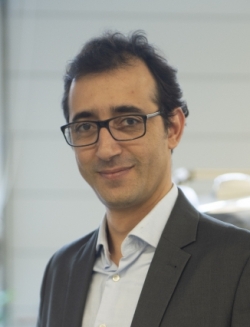 DR.Ing Mohamed Cherif Rahal is a Senior Scientist and the Head of connected and automated demartment at INSTITUT VEDECOM (VED). After an Engineering Drgree from the polytechnical institue of Constantine, he received his PhD degree in applied mathematics in 2010 from the Paris Dauphine – university ISL*. He was Post-Reasearcher at IFSTTAR (université Gustave Eiffel) in traffic and transportation science at the GRETTIA and LEMCO labs from 2010 to 2013. He is also Associated professor at the University Gustave Eiffel since 2019.

We present a localization solution for autonomous vehicles that merges heterogeneous observations (sign detection, dashed markings, buildings and GPS). Based on a particle filter, the localization solution takes into account the a-synchronicity of the data in order to estimate the most probable state of the vehicle. The general approach, then the implementation details concerning the selected types of fixed references are presented. Finally, an experimental work at the scale of the city of Versailles has been performed. The first results presented are very encouraging The fusion manages to switch from one method to another or combine several approaches at the same time.