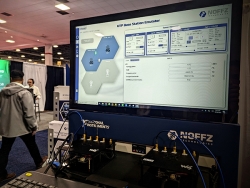 In the Autonomous Vehicle Technology Zone, Noffz Technologies is showing visitors its UTP 7064 test system, with key features including a multi-DUT (up to eight TCUs [telematics control units] in parallel) cellular (from 2G up to 5G) signaling tester; single rack for lifecycle monitoring and RF parametric measurements; and single API for making phone calls and detailed signal analysis. The system has been designed for test engineers rather than 3GPP experts.

“It is important for OEMs to test connected car components as it enables a significantly simplified process in validation by merging lifecycle monitoring and RF parametric measurement stations. It reduces validation time and capex, and there is no need for special test firmware – devices are characterized while running the end-user software,” said Vanessa Blumenstein, technical international marketing manager and team leader, live at the show.

Blumenstein explained how the UTP 7064 validates wireless functionality of connected car components in both signaling and non-signaling modes, and outlined the advantages of being two-in-one: “We register multiple TCUs in our cellular network, start an uploading session – for example, phone calls, data transfer – and record device performance in different circumstances. Meanwhile, we can periodically make RF parametric measurements with a high-precision instrument. So, in the end, we will have a comprehensive record including data throughput and EVM [error vector magnitude] or spectral emissions.

“Using traditional equipment, we can only connect a single TCU and make the same measurements one at a time. This is troublesome when running hour-long monitoring sessions. Using UTP 7064, we reduce the same test time by a factor of eight.

“The system is built in a plug-in-based architecture so you can have a separated signaling or non-signaling solution, but also a combination of both while maintaining the same user experience.”

Blumenstein concluded, “Noffz Technologies chose Autonomous Vehicle Technology Expo to showcase its UTP 7064 test system as the company believes that it is a unique test solution that helps connected car vendors reduce their costs and time-to-market. We are looking to meet engineers from validation, environmental, EMC labs or any telecommunications engineer in need of a 5G cell.”