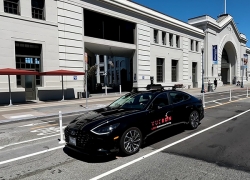 Lidar AV startup, Vueron Technology, has succeeded in obtaining an autonomous vehicle permit that uses only one lidar sensor that no one has yet tried in California, where numerous AV companies are fiercely competing.

The California Department of Motor Vehicles approved lidar-only AV testing permits for Vueron. Following this, Vueron succeeded in driving 616km from Los Angeles to San Francisco via Interstate 5 and Interstate 580 for six hours at a maximum speed of 112km/h. According to Vueron, the safety driver who rode in the vehicle never held the steering wheel during the entire trip.

Generally, diverse sensors are used at the same time for autonomous driving, but Vueron has implemented self-driving by utilizing only one lidar sensor and has verified its solution through self-driving tests in a variety of roadway conditions and environments. The self-driving system did not use any camera, radar, GPS or HD map, utilizing instead a single spinning lidar sensor.

At the expo, Vueron will show the self-drive video from Los Angeles to San Francisco, clearly demonstrating the high lidar cognitive performance.